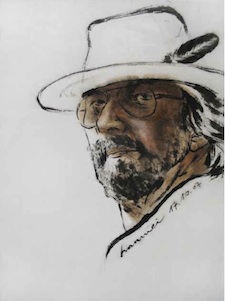 Forward to Strawberries Beyond My Window

Moritz Egetmeyer, publisher of the OH Cards, wrote the forward for the book Strawberries Beyond My Window: Games of Association for Opening the Door to Creativity and Communication, by Waltraud Kirschke (Eos Interactive Cards: Victoria, Canada, 1998).

An Excerpt from the Forward

My commitment to this special genre of games of association and communication reflects an involvement that has developed gradually over time. From today’s perspective [1998], I see all the people and ideas contributing to the creation and growth of this genre as particles in a stream, converging on one another propelled by a current of events.

Never in my wildest dreams did I envisage founding a publishing company for unusual card games! Yet when I decided to make known in Europe both the [original] OH cards – which I consider a masterpiece – and their creator, I was met by every conceivable publisher with rejection. Without the slightest idea of where it all would lead, we, a newly-founded German-Canadian family, decided simply to try our luck [with publishing them ourselves]. Today OH is published in 14 different languages [21 languages by 2012], along with the 8 titles [17 titles by 2012] that followed it. Contacts have been established with people on every continent who successfully use these cards in work and play, enriching their lives with them without being prescribed any particular way to view the world.

In 1983 I was living on a remote island off the craggy Pacific coastline of Canada. After studying for 5 years in Vancouver I had had enough of the big city and moved to where I consider Canada really begins: to the countryside. “Black Sheep Island” – as we jokingly called this place where the majority of the 500 inhabitants, migrated from all over the globe, seemed to occupy the role of outsider or wanderer within their original families – was supplied as the last outpost with electricity and ferry service. Thus, it was less the complete dropouts and more the temporary dropouts who landed there, with a view to reflecting upon their lives and coming back to their senses.

This is exactly what Ely Raman [creator of the original OH Cards] and his wife Joan Lawrence were also doing in 1983. It was inevitable that island life would bring us together: although he had grown up in Mexico, Ely spoke German and was still keen on practicing it. Both of us had participated years earlier in courses at the same training centre, Cold Mountain Institute (without having met, however), and both of us were interested in dynamic and undogmatic personal development. There, on the island, I became acquainted and fascinated with OH: the foundation stone was laid.