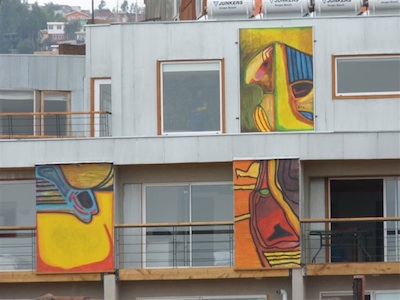 The ECCO deck consists of 99 abstract miniature paintings. Within the OH genre it is an old hand and has sparked countless small works of art by participants during my OH Seminars around the world.

ECCO is a perfect example of a travelling art exhibit. No gallery needed, no museum walls. The artist, John David Ellis, usually carries a deck of this body of work with him, which he often gifts to other artists.

He did just so in his winter refuge in Valparaiso, Chile. Gonzalo Etcheto, a local artist who sells his work on the street and in various galleries in town was the recipient of such a gift. Etcheto then turned around and worked 11 of the ECCO Cards into a large cityscape oil-painting. It’s so well done the cards are difficult to detect. The painting hangs in a private house in Chile.

The city of Valparaiso, a UNESCO World Heritage Site, is known for its colorfully painted houses. Small wonder, then, that Etcheto’s large painting sparked yet another artistic venture: A well-known Chilean muralist produced five large reproductions of ECCO Cards.

These murals were hand-painted with weatherproof paint onto eight-by-five-foot sheets of plastic. As a final touch, John David Ellis signed the murals. They now adorn the outside of an apartment building in Valparaiso that is nicknamed “ECCO House.”